The Ballarat Diocesan Social Justice Commission members have been deeply concerned regarding the number of people forcibly displaced globally.  According to UNHCR, by the end of 2014, 59.5 million individuals were forcibly displaced worldwide as a result of persecution, conflict, generalized violence or human rights violations.  An increase of 51.2 million on that of 2013, making this the highest ever increase annually.

In January of this year, Pope Francis raised the problem of the world’s indifference to asylum seekers at his annual meeting with members of the Diplomatic Corps accredited to the Holy See.  In March 2015, Pope Francis highlighted the need to overcome a ‘globalisation of indifference’ to the most vulnerable and marginalised of the world.

In an effort to become better informed and, at the same time, raise awareness within the broader community, the Commission set about hosting a Refugee and Asylum Seeker Forum, “Sanctuary Ballarat, Welcome the Stranger.”  Local Ballarat Asylum Seeker and Refugee Support Groups were invited to come to a meeting to join with us in planning this event.  Master of Ceremonies for the Forum was Counsellor Belinda Coates of the Ballarat City Council.

Keynote Speakers were invited to address global and national issues.  They were Daniel Webb, Director of Legal Advocacy from the Human Rights Law Centre and Sr Brigid Arthur csb from the Brigidine Asylum Seekers Project. 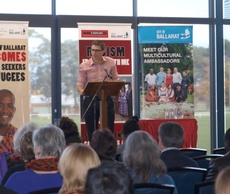 Among the many issues Daniel spoke about was the human rights challenges faced in Australia by asylum seekers and refugees with major changes to the law and policy which affects asylum seekers, this in turn, eroding their democratic freedom.  The issues that surround Temporary Protection Visas (TPVs); Safe Haven Enterprise Visas (SHEVs) and Refoulement.  That is, where Australia expels a person who has the right to be recognised as a refugee (the principal of non-refoulement having first being laid out in 1954 in the UN-Convention relating to the Status of Refugees).   Australia has non-refoulement obligations under both the refugee convention and the convention against torture: “No State Party shall expel, return [refouler] or extradite a person to another State where there are substantial grounds for believing that he would be in danger of being subjected to torture.”

The second Keynote Speaker, Sr Brigid Arthur, spoke of the work that the Brigidines supporting refugees through their project. For example  visiting asylum seekers in detention centres;  providing accommodation to a number of asylum seekers;  supporting asylum seekers on bridging visas and  lobbying the government to promote changes to policy and procedures that contradict the sisters foundational beliefs, to name a few.  Sr Brigid also shared some of the experiences of her work with refugees and the many issues they face when placing their applications, the difficulties involved.

Following the keynote speakers, two refugees shared their personal journey in securing refugee status here in Australia. Although different, both in time and situation, the telling of their stories was inspirational, demonstrating amazing courage of parents wanting to secure freedom and safety for their child and another, a youth fleeing atrocities in search of living a life in safety, in freedom and with dignity.

Another aim of the Forum was to highlight the outstanding work of the many local organisations that support asylum seekers and refugees (including youth) in the Ballarat and outlying districts. The many issues and challenges they face.  A panel of representatives from a few of these organisations responded to the many queries from the attendees. Each Ballarat group had representatives present with an information table providing a display of their various activities.