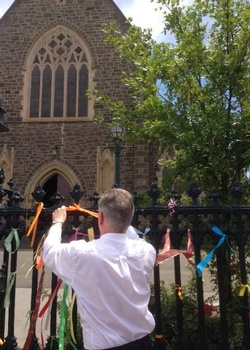 Bishop Bird made the profound public statement after tying bright coloured ribbons to the Loud Fence outside St Patrick's Cathedral, Ballarat in Sturt Street in January. The campaign, which began in Ballarat last year, is aimed at ending the decades of silence surrounding child abuse and supporting survivors. It has since gone viral with Loud Fences created all over the world, including at the gates of the Vatican.

“If there is just silence between two people, then one doesn’t know what the other is thinking,” Bishop Bird said. “This gesture is a way to recognise the suffering and publicly show support to victims, survivors and their families.” He said he hoped the gesture opened up channels of communication between the Catholic Church and survivors.

It was also a poignant public acknowledgement of clergy abuse victims who do not have a voice because they had died prematurely or those who turned to suicide because the pain of the sex crimes was too great to bear. As momentum picks up for the sex abuse hearing in Ballarat next month, survivor Andrew Collins said it would be a catalyst for other clergy to follow.

[Bishop Paul Bird ties a ribbon at St Patrick's Cathedral.] “What Bishop Bird has done will be noticed far beyond Ballarat,” Mr Collins said. “It will put pressure on other senior clergy to publicly show their support.” He said the symbolism of the gesture was monumental.

“It’s wonderful to see senior clergy standing up and publicly supporting survivors,” Mr Collins said. “Sometimes words just aren’t enough and a small gesture like tying a ribbon speaks volumes. The church is waking up to the fact these were Catholic children who were abused. To have the clergy start to be involved in Loud Fence and publicly support them is a real turning point.”

He hoped it would break down barriers between the church and victims.   “People can often have the  perception that is an “us against them” struggle, but I don’t see that at all,” Mr Collins said. “The royal commission is a quest for the truth to come out. It’s a move to address the past so that both sides can heal.”

Ballarat Loud Fence creator, Maureen Hatcher, hoped it would open the floodgates for parishioners and the wider community to join the movement.   “It sends out a big statement that people shouldn't have to sneak around in the dark to tie a ribbon,” Ms Hatcher said. “It shows the support for survivors is coming from the leaders of the church in Ballarat.”  Within hours, a Loud Fence Facebook image of Bishop Bird tying a ribbon was “liked” 200 times.

Article courtesy of the Ballarat Courier