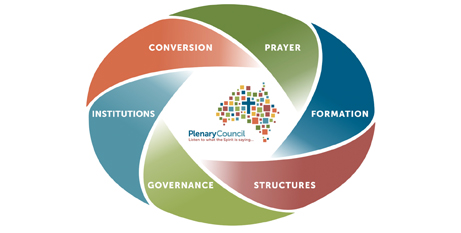 The agenda of the Fifth Plenary Council of Australia calls those attending the assemblies to “develop concrete proposals to create a more missionary, Christ-centred Church in Australia”.

The Council agenda, which has emerged from three years and several layers of prayer, listening, dialogue and discernment, will shape the program of the Council’s assemblies – the first of which opens on October 3 this year.

The agenda’s preamble draws from Pope Francis’ apostolic exhortation Evangelii Gaudium, which explores the Pope’s “dream of a ‘missionary option’”.

“That is, a missionary impulse capable of transforming everything, so that the Church’s customs, ways of doing things, times and schedules, language and structures can be suitably channelled for the evangelisation of today’s world rather than for her self-preservation,” the Pope wrote.

Plenary Council president Archbishop Timothy Costelloe SDB said that invitation and exhortation to be a missionary people runs through the agenda.

“Through the Plenary Council, we are being called to consider how we can be a Church that goes out to the peripheries, that welcomes all into our communities and shows the face of Christ to the world,” Archbishop Costelloe said.

The agenda has been developed in the form of posing questions, with 16 questions falling under six themes: Conversion; Prayer; Formation; Structures; Governance; and Institutions.

“So much of what we heard during the Council journey related to this concept of ‘conversion’ – personal conversion, communal conversion and institutional conversion – with an ever-deeper renewal in Christ,” Archbishop Costelloe said.

“Each member attending the assemblies will bring their own unique gifts to the agenda on behalf of the People of God in Australia.”

Plenary Council facilitator Lana Turvey-Collins said the agenda, which has now been published on the Plenary Council website, asks questions with widespread relevance.

“These questions have been developed for a specific purpose – for prayer, conversation, discernment and decision-making during the Plenary Council – but they are questions that can challenge each of us, each parish, each Church community,” she said.

“In preparing for the Council and beyond, the agenda can be a rich source of reflection and contemplation in our own settings.”

Archbishop Costelloe asked people to continue to pray for the Council and for the members who will attend the assemblies. The more than 280 members will be participating in focused formation sessions starting this week.