Lumen Christi Primary School, Delacombe celebrated twenty-five years as a school community on Thursday, August 6 which was the Feast of the Transfiguration.  Mass was celebrated by Fr Kevin Maloney and attended by over three hundred and forty students, staff, parents and friends of Lumen Christi.

The theme of the day to recognise and celebrate the story of the school so far was “Lumen Christi…my story…your story …our story!”  There was rich symbolism in the prayer space in a bowl of soil to acknowledge the Wathaurong people who are the traditional custodians of the land.

Recognition was given to people present who represented the many others who were integral to the beginnings of our story as a school community. Plaques acknowledged their contributions to the formation of the school:

“Fr. Barry Ryan, a man of faith and vision, who believed in the need for a new Catholic school in this area”

“Barry and Lois James, who generously donated the land for the building of our school”

Significantly, there was also the original stick cross of Lumen Christi, made by the gathering of twigs and branches within the school grounds over twenty-five years ago. This cross recognises and celebrates the Catholic faith of our school and the presence of Jesus amongst us.

Following Mass, foundation principal Fiona Tonkin shared her story of Lumen Christi Delacombe, which was very strong on building a real sense of community. Former principal Bronwyn McNamee shared her recollections via a video presentation and previous principal Lee Schlooz reminisced on some wonderful times in the life of the school, in particular floods! 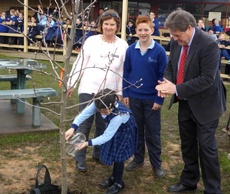 The day concluded with the planting of a tree to recognise the contributions of the founding families and staff and to the many past, present and future staff and families who continue to enrich the culture of Catholic education at Lumen Christi.