Prayers for the members to the Plenary Council 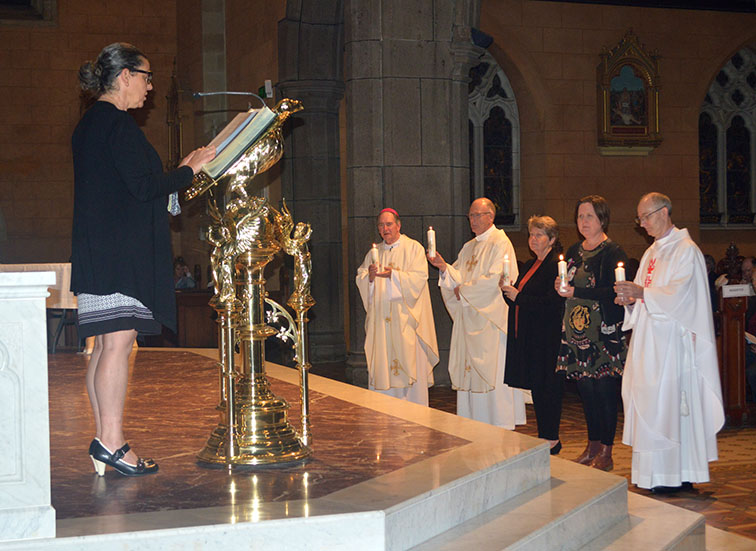 The Diocese of Ballarat prayed for their members (formerly known as delegates) to the Fifth Plenary Council of Australia at the Diocesan Mass of the Oils on March 29.  The first assembly of the Plenary Council will open in Adelaide in October with a combination of online and face-to-face participation, as uncertainty remains over restrictions on travel and gatherings.

Given the postponement of the Plenary Council assemblies by a year due to COVID-19, it was proposed that dioceses consider commissioning their members on October 4, 2020 – the day the first assembly was due to commence.  However, restrictions were still in place in Ballarat so it was decided to wait until this year’s Mass of the Oils.

The Diocesan Plenary Council Facilitation Team, which includes Bernadette Tolan, Sr Veronica Lawson, Bernadette Lynch, Bill Hitchin and Jane Collins, led the prayers for the members.  Bernadette Tolan acknowledged the members and invited the gathering to listen to a quote from the Pastoral Constitution on the Church in the Modern World from the Second Vatican Council.   “The joys and the hopes, the griefs and the anxieties of the people of this age, especially those who are poor or in any way afflicted, these too are the joys and hopes, the griefs and anxieties of the followers of Christ. Indeed, nothing genuinely human fails to raise an echo in their hearts. United in Christ, they are led by the Holy Spirit in their journey to the kingdom of their Father and they have welcomed the news of salvation which is meant for everyone.”

Sr Veronica Lawson invited the members forward and prayed to the Holy Spirit for empowerment and courage for the members and that God grant them the grace to be open to the Spirit leading them through the days of prayer, listening and discernment during the process and gatherings of the Council.

Jane Collins and Bill Hitchin lit a plenary candle for each member which was then presented to them as Bernadette Lynch prayed the following prayer, “May the light of Christ be your guide. We give you these candles which serve as a sign of the Spirit at the centre of our journey, forever burning brightly, inviting us to look beyond the shadow of the now to a brighter future. May the Holy Spirit guide us.”

Marie Shaddock said, “It was a very powerful and moving experience that reinforced the fact that we are representing the whole of the diocese as a “community of communities” as Bishop Paul said in his homily. Standing there as an individual was both humbling yet bolstering in the sense that you were aware of so many other people praying for you. I love my candle, the simplicity and fragility of it and keep it for “special” prayer times when I am feeling the need of a bit more guidance and strength. It reminds me that even in the dark we can still see and be the light.”

Members of the Fifth Plenary Council of Australia are those who have been called to participate in the assemblies. Some of the members are people who “must” be called to a plenary council, as outlined in Church law; others are people who “may” be called, who were chosen through a range of processes across the country. The members have previously been referred to as “delegates” to the Council. The language of “member” better reflects the status of those called to a Council, as well as the sense that all members are there to represent the People of God in Australia, not just their local Church community. Members are the only people who can vote at the Council assemblies and it is expected there will be around two hundred and eighty members attending.