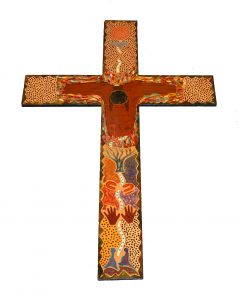 many tens of thousands of years.

We acknowledge the traditional custodians of the land who have walked upon and cared for this country for thousands of years. We pay our respect to them and their cultures and to Elders past, present and emerging.

We deeply respect the strong connection of Aboriginal and Torres Strait Islanders to the Australian land and value the many gifts they bring to our community.

The best way to find out who the formally recognised Traditional Owners for an area is to consult the interactive map found here from Aboriginal Victoria.

As a diocese, we endeavour to acknowledge events associated with the promotion of reconciliation and respect to the Aboriginal and Torres Strait Islanders such as National Reconciliation Week, Sorry Day and NAIDOC Week.

The Aboriginal Catholic Ministry has been serving the community for thirty years. Having undergone refurbishment, the ACM has a new chapel with stain-glass windows designed by renowned Aboriginal artist Richard Campbell and a specially made altar and tabernacle to represent the inculturation of the Catholic Church in Australia.

The Aboriginal Catholic Ministry Manager for Victoria is Sherry Balcombe and below is a short profile of Sherry.

The Opening the Doors Foundation is an Aboriginal-led community organisation supporting educational opportunities for Aboriginal children. The Foundation enables Aboriginal students to participate fully and equally in education, and supports their families to make their own choices about their children’s future. The Foundation believes that consistent support self determination are key to raising dreams and aspirations of the next generation.

A video has been launched to commemorate the occasion of the 20th anniversary of the Opening the Door Foundation in 2021.

The full NATSICC Statement for Australia Day 2022 and other information can be read below. 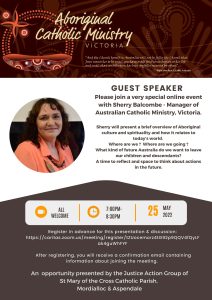